And [Jesus] cured many who were sick with various diseases, and cast out many demons; and he would not permit the demons to speak, because they knew him.  ~Mark 1:34 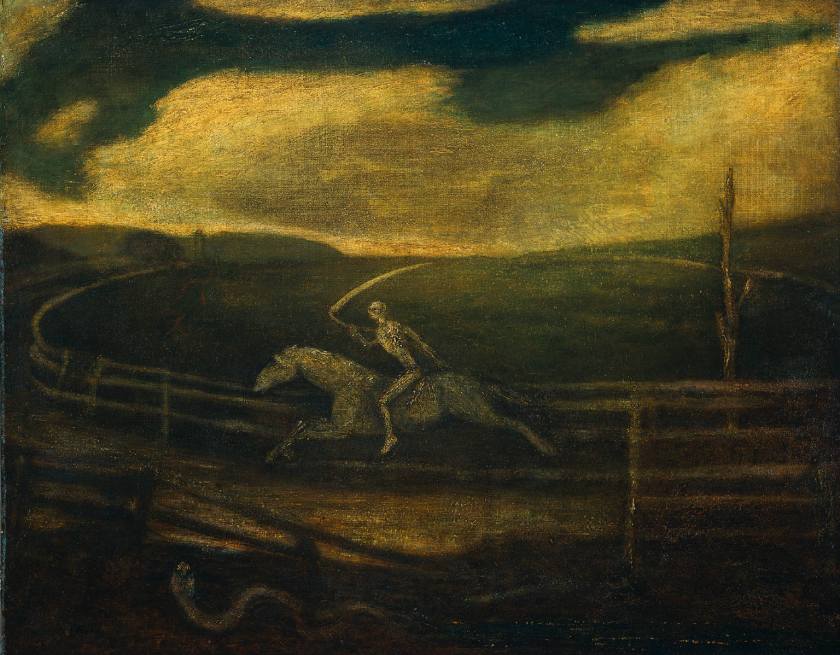 During the latter part of the nineteenth century, America was engaged in rapid growth in the areas of manufacturing, commerce, and the building of railroads. The arts were not a priority. Serious artists were likely to go to Paris to absorb the culture and milieu during an era that brought great changes in the arts of Europe. Artists who remained in America often studied in New York City and then lived there, or nearby, as they built careers and established reputations.

Like the bohemian life in Paris, artists in New York’s Greenwich Village lived in a place where they could work, socialize, and be unencumbered by the expectations and values of society at large. For most of his adult life, Albert Pinkham Ryder, lived in The Village and was dedicated to painting. He had no desire to pursue fame, or accumulate material wealth. While his contemporaries in France, the Impressionists, were going outside to paint the effects of sunlight, Ryder stayed indoors and most of his images developed from within himself. An exception was The Race Track that he painted as the result of a direct experience.

Ryder often dined at a hotel in The Village where his brother was the proprietor. In a conversation one evening, he learned that his waiter gambled on horses and was excited about a much publicized race that would be held the following day. The waiter was going to place his entire savings on a horse that he believed would win. On the day after the race, Ryder returned to the hotel but the waiter was not there. When he inquired, he was told the favored horse came in third and the man lost his entire savings. He was unable to cope with his loss and took his own life.

Ryder’s painting, The Race Track, also known as, Death on a Pale Horse, depicts a lone skeleton-like figure on horseback carrying a scythe and circling the race track in a reverse direction. The track’s fence is broken in two places and the landscape is barren except for a lone dead tree. The race track, a metaphor for life, circles endlessly. In the foreground, a snake represents symbolically Satan, temptation, and betrayal. The man that took his life was possessed with gambling and to Ryder, the race track was, in effect, his death. As in the four horsemen of the Apocalypse, Ryder has placed the figure of death on a pale horse.

One thought on “The Race Track | Epiphany 5B”