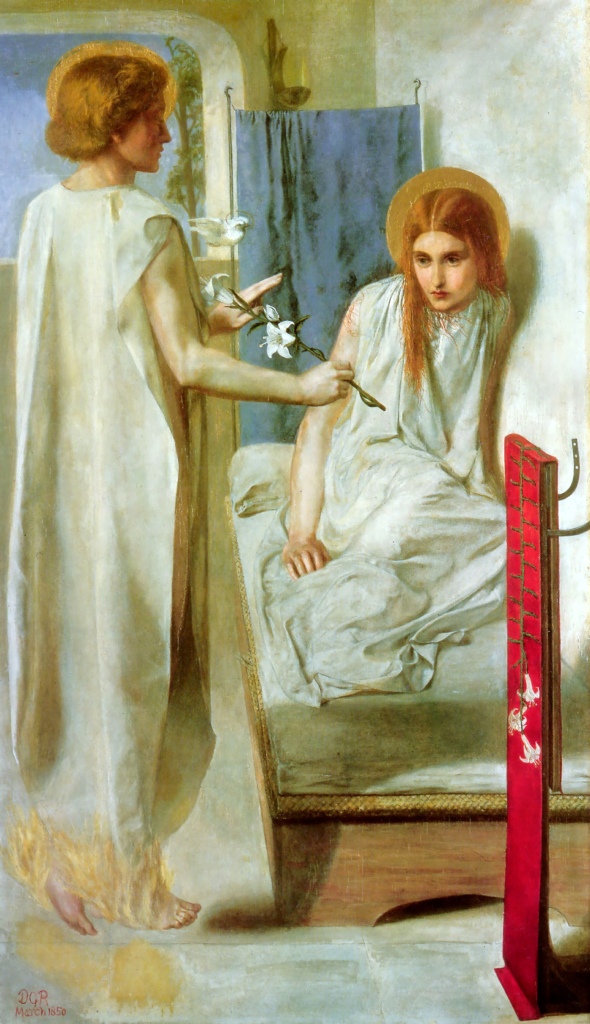 At the time Dante Gabriel Rossetti painted, Ecce Ancilla Domini (Latin: “Behold the handmaiden of the Lord,” also called, The Annunciation), England was the most advanced industrialized nation in the world. In the following year, 1851, the Great Exhibition in London (the first “World’s Fair”) celebrated the advancements of industry and culture. Like leaders of industry, English artists of the day were looking toward the future. Unlike many artists of his generation, however, Rossetti and like-minded friends did not follow their contemporaries. Instead of looking toward new directions in art, they looked back to medieval times and called themselves the Pre-Raphaelite Brotherhood (the name is in reference to a time before Raphael and the fifteenth century Renaissance). Among their beliefs was that art lost its spiritual quality after the Renaissance.

In subject matter, paintings of the annunciation depict the angel Gabriel greeting Mary to tell her she would bear a son and call him Jesus. Fifteenth and sixteenth century artists often placed this event at an intimate indoor setting or on a porch. Mary is pensive usually with a dove, representing the Holy Spirit above her head.

In contrast to idealized settings – often with dramatic lighting – created typically by artists of the Renaissance and beyond, the Pre-Raphaelites depicted subjects as real people in natural surroundings. In Rossetti’s, The Annunciation, Gabriel does not have dazzling rainbow-hued wings and Mary is not sitting in a throne-like chair. Instead, she is on her bed in a loose white nightgown looking as though she was awakened just a few minutes earlier and is now sitting up trying to process the message that Gabriel brought. She seems somewhat bewildered. A wingless Gabriel is standing upright by the bed, looking like an ordinary man floating in air slightly above the floor with his feet in flames. [Rossetti’s brother posed for Gabriel and he was originally without a halo. His younger sister, Christina, posed for Mary.] As in traditional depictions, Gabriel is presenting a lily (symbolizing purity) to Mary; a small haloed-dove is nearby. Although the red rectangular shape in the right foreground may not be recognized immediately, it is a sewing stand with its work-surface folded down. The image on it is a long-stemmed lily that Mary has been embroidering.

When Rossetti’s Annunciation was exhibited initially it did not receive favorable reviews. Critics were not accustomed to biblical subjects being treated in this non-traditional manner.

In addition to painting, Dante Gabriel Rossetti wrote poems. The poetry of his younger sister, Christina, however, received far more acclaim. Her, poem, “In the Bleak Midwinter,” was set to music by Gustav Holst and is a Christmas hymn of the Anglican Church. This poem also was set to music as an anthem by Harold Darke. Anglican Churches honor Christina Rossetti with a feast day on April 27th.