Mary Magdalene: Apostle to the Apostles

Every July 22nd the Episcopal Church commemorates Mary Magdalene, Apostle to the Apostles. This year her commemoration is moved to Monday, July 23rd.

Misidentification of Mary as reformed public sinner achieved official standing with a powerful homily by Pope Gregory the Great (540-604).
Henceforth, Mary of Magdala became known in the west, not as the strong woman leader who accompanied Jesus through a tortuous death, first witnessed his Resurrection, and proclaimed the Risen Savior to the early church, but as a wanton woman in need of repentance and a life of hidden (and hopefully silent) penitence. Interestingly, the eastern church never identified her as a prostitute, but honored her throughout history as “the Apostle to the Apostles”. Read more at Mary of Magdala– Apostle to the Apostles 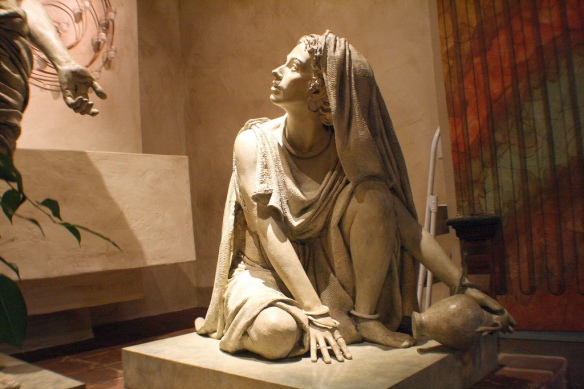 The Gospel narratives give a prominence to women in the Jesus movement unusual in ancient society; this culminates in the extraordinary part which they play in Matthew’s, Mark’s and John’s accounts of the human discovery of the Resurrection. All three evangelists make women the first witnesses to the empty tomb and resurrection of Jesus; this is despite the fact that in Jewish Law women could not be considered as valid witnesses. The most prominent named woman, first in all three accounts, is Mary Magdalene (‘from Magdala’ in Galilee). She was a close associate of Jesus in his public ministry and has continued to arouse a set of variously motivated fascinations among Christians throughout the ages. Some overexcited modern commentators and mediocre novelists have even elevated her (on no good ancient evidence) to the status of Jesus’s wife.