Christ is our light.

For once you were darkness, but now in the Lord you are light.
Live as children of light, for the fruit of the light
is found in all that is good and right and true.
Ephesians 5:8-9 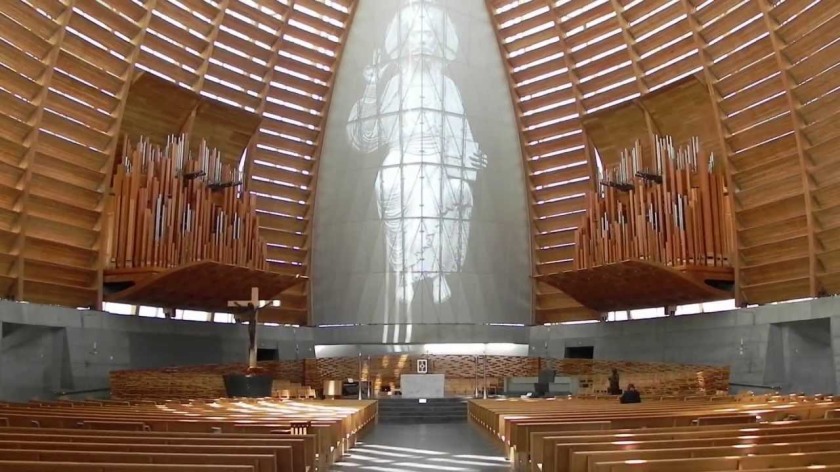 Interior view of Christ the Light Cathedral in Oakland, CA

When Christ was transfigured, appearing in radiant glory with Moses and Elijah, the disciples wanted to build booths for them. When we build churches today, such as the strikingly transcendent interior of the Cathedral of Christ the Light, are we trying to “build a booth” to contain God? Or are we transformed ourselves when worshiping in a church of great beauty?

The Cathedral, located on the shores of Lake Merritt in Oakland, is designed with the symbolic representation of Jesus Christ at its core. The 58-foot high image within the Omega window (pictured here) is created by natural light passing through aluminum panels that have been pierced with 94,000 holes. This image is a depiction of Christ in Majesty, borrowed from the sculpture of Christ in the central doorway of the west entrance to Chartres Cathedral in France. The use of natural light in the Oakland Cathedral symbolizes the movement of salvation history, climaxing with the tangible, powerful, presence of Christ.[1] As the sun moves across the sky, the movement of light transforms the worship space.

The intentional design of this sanctuary, active in its beauty and its theological meaning, reveals the reciprocal exchange of love between God and humanity. As humans, we offer our humble devotion, and God’s presence is strongly felt. In a place of such beauty, natural and human-made, there are possibilities of transformation — transformation and devotion are brought to life in an exchange of heavenly and earthly love.

May we come at last to the light of everlasting life.

Patrick was born into a Christian family somewhere on the northwest coast of Britain in about 390. His grandfather had been a Christian priest and his father, Calpornius, a deacon. Calpornius was an important ofﬁcial in the late Roman imperial government of Britain. It was not unusual in this post-Constantinian period for such state officials to be in holy orders. When Patrick was about sixteen, he was captured by a band of Irish slave-raiders. He was carried off to Ireland and forced to serve as a shepherd. When he was about twenty-one, he escaped and returned to Britain, where he was educated as a Christian. He tells us that he took holy orders as both presbyter and bishop, although no particular see is known as his at this time. A vision then called him to return to Ireland. This he did about the year 431.

Tradition holds that Patrick landed not far from the place of his earlier captivity, near what is now known as Downpatrick (a “down” or “dun” is a fortiﬁed hill, the stronghold of a local Irish king). He then began a remarkable process of missionary conversion throughout the country that continued until his death, probably in 461.

The Collect for the Commemoration

Almighty God, in your providence you chose your servant Patrick to be the apostle of the Irish people, to bring those who were wandering in darkness and error to the true light and knowledge of you: Grant us so to walk in that light that we may come at last to the light of everlasting life; through Jesus Christ our Lord, who lives and reigns with you and the Holy Spirit, one God, for ever and ever. Amen.

May we respond to God’s answer of our prayer and walk as children of the light.  ~Fr. Dan

On February 2nd we annually recall the Prestation of our Lord in the Temple. Here is an excellent summary of the commemoration (with some additional links).

Counting forward from December 25 as Day One, we find that Day Forty is February 2. A Jewish woman is in semi-seclusion for 40 days after giving birth to a son, and accordingly it is on February 2 that we celebrate the coming of Mary and Joseph with the infantJesus to the Temple at Jerusalem to offer sacrifice, both on behalf of Mary and on behalf of Jesus as a first-born male. As they did so, they were greeted by the aged Simeon.

In a Sunday-School pageant I once saw, the narrator said, “And now Simeon bursts into a spontaneous song of praise, assisted by the Temple Choir.” His song, called the Nunc Dimittis, has always had a prominent role in Christian worship. It has often been rendered in verse. [ … ]

On the other hand, Groundhog Day (“If the groundhog (or woodchuck, a kind of marmot, which burrows and hibernates) sees his shadow on 2 February, there will be six more weeks of winter.”) is strictly a secular holiday, confined, as far as I know, to the United States.

By the seventh century it had become the custom to begin the worship service on February 2 with candlelighting by the congregation gathered outside the worship area followed by a procession into the Church with all carrying their lighted candles. This was to relive Simeon’s experience of meeting the “light of nations” at the temple. The pastor Sophronius wrote in that century

Everyone should be eager to join the procession and to carry a light.

Our lighted candles are a sign of the divine splendor of the one who came to expel the dark shadows of evil and to make the whole universe radiant with the brilliance of his eternal light. Our candles also show how bright our souls should be when we go to meet Christ.

So let us hasten to meet our God.

The custom of beginning the worship on this festival with a candlelight procession is the origin of the day’s other name, “Candlemas.”

The festival day’s position at midwinterexactly midway between the winter solstice December 21 or 22 each year in the Northern Hemisphere, and June 20 or 21 in the Southern Hemisphere. and the spring equinox the day when daylight lasts for exactly 12 hourscaused it to be a time for taking inventory of one’s winter supplies. One English poem goes:

The provident farmer on Candlemas Day,

The day’s emphasis on light and life at midwinter gave rise to many superstitions and legends. Some believed that “if the day be clear and sunshiny, it portends a hard weather to come; if cloudy and lowing, mild and gentle season ensuing.” From that piece of weather folklore it is not too difficult to understand how our Pennsylvania Dutch descendants of Germanic peoples who emigrated to the United States (primarily to Pennsylvania), from Germany, Switzerland and The Low Countries prior to 1800 legend of Groundhog Day began.

By the seventeenth century the Presentation of Our Lord was understood to be the absolute end of the Christmas season. Indeed, Ash Wednesday the first day in the season of Lent can follow as early as just two days later on February 4. As the end of the Christmas festivities, it was the day to complete the removal of all the holiday decorations. This, too, became the cause of superstition:

Down with Rosemary, and so

Down with Bays and Mistletoe;

Down with Holly, Ivy, all

Where with ye drest the Christmas Hall;

That to the superstitious find

Not one least Branch there left behind

For look, how many leaves there be

Neglected there, maids, trust to me,

So many goblins you shall see.

(sheet music and links to audio)