Exploring our faith through the arts. 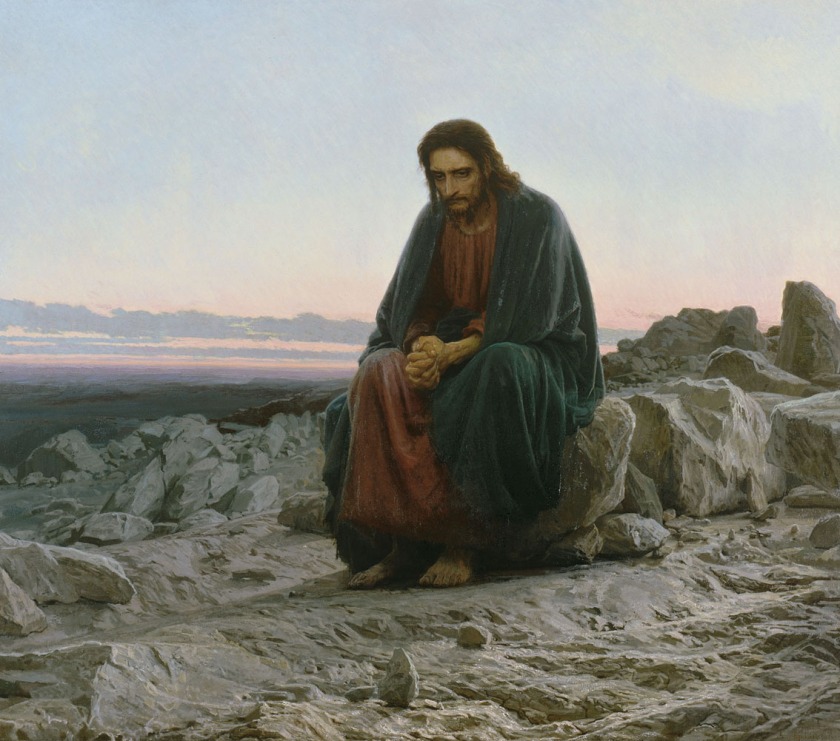 Enter into a visual prayer experience this Lent with Arts & Faith: Lent. Each week we’ll provide a video commentary about a work of art inspired by the Sunday Scriptures. Use these videos to take a new look at this season of spiritual renewal through the lens of sacred art.

Commentary is by Daniella Zsupan-Jerome, assistant professor of liturgy, catechesis, and evangelization at Loyola University New Orleans. She holds a bachelor’s degree in theology from the University of Notre Dame, a master’s degree in liturgy from St. John’s University in Collegeville, a master’s degree in religion and the arts from Yale Divinity School, and a Ph.D. in theology and education from Boston College. Her unique background in faith and art brings to life a new way of observing Lent and understanding the season on a more personal level.

Christ in the desert by Ivan Kramkoi is the meditation for the First Sunday in Lent. I encourage you to use this internet resource during your Lenten Journey in 2017. ~Fr. Dan

Read the transcript of this video on Loyola Press.

Image: Pinterst Page for the art of Ivan Kramkoi

Luke 4:1 Jesus, full of the Holy Spirit, returned from the Jordan and was led by the Spirit in the wilderness, where for forty days he was tempted by the devil

During the Italian Renaissance of the fifteenth and sixteenth century, the cities of Florence and Rome were major centers of art. Venetians also could boast of their art during this period; Titian, Tintoretto, and Veronese were among the finest artists in Europe. Being at the northern tip of the Adriatic Sea, the people of Venice were seafarers and their merchant ships sailed eastward to trade with ports throughout the region. Through trade, Venetians acquired great wealth and as was the practice (then and now), people of means acquired possessions to enrich their lives and serve as symbols of status. Inasmuch as expensive sports cars and private jets were not available, their possessions were sumptuous palaces and fine art. They also were generous in their support of public projects and the Church. Because of favorable working conditions and an opportunity to earn fine salaries, many painters, sculptors, and artisans made Venice their home. Veronese (given name Paolo Caliari), studied initially in the city of his birth, Verona, but soon was living and working in nearby Venice. In Venice, he became known simply as “Veronese,” a person from Verona.

As Renaissance art continued from the fifteenth century to the sixteenth there was a tendency toward mannerism and then from mannerism, art developed into the baroque style of the seventeenth century. “Baptism and Temptation of Christ,” painted by Veronese in the latter part of the mannerist period is baroque-like in its dramatic composition. As we enter the painting at the lower left, we see John the Baptist in shadow but we do not linger. Instead, we move past him immediately to the upper torso of Christ which is bathed in light emanating from a dove representing the Holy Spirit. Not only does Christ receive our immediate attention but also all figures in this section of the painting are focused on him. Included in this drama are a cherub and angels hovering excitedly. The dove illuminates the foreground figures while shadows of the trees close off pictorial depth.

The narrative continues as we leave the baptism and move to the right where after forty days and nights of fasting, Christ is with Satan in a clearing. A forest is in the middle ground and then in the background beyond the trees are buildings representing the kingdoms of the world and their splendor. Unlike the animated scene of the baptism, the temptation of Christ is calm. Satan is not depicted with horns or forked tail but appears as an old bearded and seemingly harmless figure in a gray robe.

A visitor to Venice today may still feast visually on its art but they will not see evidence of shipping and trade. The city is supported financially now by tourists who dine at fine restaurants, ride the canals in gondolas, and feed pigeons after lunch at McDonalds in St. Mark’s Square.

On Sunday (2/17/13) we heard about the Temptation of Jesus. Periodically that same tune plays through the chimes we hear. What does such a tune stir up in you?

Temptation. A reflection by Pastor Steve.

In our Sunday handout I included this meditation. For those of you not able to be around the table in real life (= irl), I share the beginning of Steve’s meditation here:

I am not tempted to turn flint into rye, to be able to fly—or even drift nicely—or to bow down to some guy in a red suit and a tail so the kingdoms of the world worship me. Jesus knew he couldn’t do magic, defy gravity or make people like him. But I do want to have power and to be in control of my life, to avoid suffering or struggle, and to manage what other people think of me. I am tempted to make of things something that they aren’t. I’m tempted to take the comfortable route. I’m tempted to expect that you should protect me from difficulty. And I really want to make people like me.

In this sere land of desire, God, rip these idols from my hands.

You’ll want to read the rest; you can find the complete meditation here: Temptation by Steve Garnaas-Holmes, February 15, 2013, on his blog, Unfolding Light.

As we consider the temptation of Jesus (and our many temptations)

We are all asked to do more than we can do. Every hero and heroine of the Bible does more than he or she would have thought it possible to do, from Gideon to Esther to Mary. Jacob, one of my favorite characters, certainly wasn’t qualified. He was a liar and a cheat; and yet he was given the extraordinary vision of angels and archangels ascending and descending a ladder which reached from earth to heaven.

One of my favorite teachers, Richard Rohr, has a weekly blog Unpacking Paradoxes. On June 17th he unpacked the phrase, “lead us not into temptation,” from the “Our Father.”

This line (In Matthew’s version of the Our Father) has never made sense to me, although I continue to say it since this is the way it is usually translated; but I cannot really appeciate it as is. Sometimes, it is translated “do not put us to the test” (In Luke’s version), which still seems strange and problematic. Why would God “lead” us into temptation or “put us to the test” to begin with? Is human life an obstacle course, a testing ground? Are we all on trial? I thought God’s usual job was to lead us away from temptation! Why would we need to ask God to NOT lead us INTO temptation? Does he?

Please read the rest of his post as he answers these questions. It is a different answer than you might expect. It is humbling and it makes a lot of sense to me.

BRAMER, Leonaert
(b. 1596, Delft, d. 1674, Delft)
Click to open Web Gallery of Art Artist Biography and to explore other works by this artist.